skip to main | skip to sidebar

We explored more of the Mojave Desert this summer.  In particular, we went to Mojave National Preserve and Joshua Tree National Park.  We stayed in Needles and Twentynine Palms respectively.  My wife commented that one of the big differences between to the two places was trains--Mojave NP had them and Joshua Tree NP didn't.  Many of the early National Parks were created at the urging of the railroads to give passenger train riders a destination.

The Twentynine Palms stay was especially interesting because of 29 Palms Inn.  This is an eclectic array of structures occupying the western third of the Oasis of Mara, a classic California fan palm oasis.  Here's a screenshot from Google Maps--

Notice the line of vegetation that marks the Pinto Mountain Fault.  The grinding at the fault boundary produces an impermeable clay layer.  Underground water infiltrating from the higher land to the south comes to surface resulting in an oasis, although these days human or natural hydrologic changes have caused the flow to diminish to the point that there's no longer surface water without some pumping.  Some claim this place is the source of the name of the town of Twentynine Palms.  During the railroad expansion in the American West, Southern Pacific Railroad was granted ownership of the oasis, as well as considerable other property along its route.  SP sold the land to J.P. Roberts and his partners.  They built the Gold Park Hotel, a collection of cabins east of the oasis.  After a few years, Roberts decided he liked the wetter west end of the oasis better and had the cabins dragged there with a pickup truck.  The new location became the 29 Palms Hotel, later renamed 29 Palms Inn.  Roberts sold the inn to Harry Johansing, whose descendants have run the place ever since.  They're on the 5th generation.  In 1950, they donated the eastern 2/3 of the oasis to the National Park Service to become the Headquarters and Visitor's Center of Joshua Tree National Park.

The Real (This) American Life; The Casa Grande

In mid-May, my wife and I were driving across the deserts of central Arizona to deliver some photos to an exhibit in Gilbert of all places.  We listened to "Hot in my Backyard" on This American Life on the radio as we drove.  The program was an interesting discussion of the state of the dialogue relative climate change.  I decided to send Ira Glass and his staff a note to see if I could interest them in a discussion of the larger picture.  I never heard back, as is more common than not.  Here's what I sent.  Since I'm remaking this into a blog post, I've put some links into the text.

Your shows are very well done.  We listened to “Hot in My Backyard” recently while we drove across the desert to Gilbert, Arizona, to drop off a photo for an art show my wife had entered.  We stopped at the ruins of the lost Hohokam civilization at Casa Grande National Monument on the way home to Tucson.  The program was interesting and insightful, but missed the real story of our age.  I can’t honestly say that I heard anything that surprised me, but I’m a Ph.D. biologist by training.  We were discussing the likelihood of climate change in the 1970s and 80s.  An atmospheric scientist friend told me in the early 80s that in his circles there was speculation that if the Antarctic ice cap destabilized it could slough off in as little as 40 years.  For the moment, it’s stabile.  Watching the wave of realization that we can affect the world’s climate spread out from the scientific community across the rest of society is interesting.  You presented scenes of that wave of thought change well.  But what if climate change is only one subplot of a larger story, a distraction almost?

Since it's been the better part of a year since I wrote a post, a few things have happened.  The strangest one hands-down has been the hysteria over the blip in U.S. oil and gas production due to use of hydraulic fracturing on "tight" sediments.  A few days ago, George Mitchell passed away.  His company, Mitchell Energy and Development Corporation, developed the techniques that have spurred that production blip-- http://cgmf.org/p/family-statement.html.

It's pretty interesting that Mitchell became quite interested in sustainable living and created a foundation for that purpose.  Hydraulic fracturing, "fracking", is an inherently unsustainable production method for gas and oil.  A frack well is expensive to drill and has a miserable production curve.  And many reasonable people are concerned about the long-term environmental effects of adding fractures and fluids to sedimentary rock layers underlying vast regions of our country.  Dave Summers on his blog, Bittooth Energy, explains the specific case of Bakken (North Dakota) hydrofracking, where new wells must be drilled at a furious rate to attempt to compensate for the rapid production drop off of a shale oil well.  The Bakken is often pointed to as our salvation relative oil production; not so.

Despite the production problems with frack wells, many commentators project wondrous output for years to come, even claiming the U.S. could become a net producer and exporter of oil and gas.  Here's two studies that try to puncture these trial balloons of fantasy.  The New Economics Foundation out of Great Britain, explains that the expense of new sources of oil combined with declining production of conventional sources, will force economic contraction across the developed world.  The Energy Watch Group from Germany does a comprehensive analysis of all the major non-renewable energy sources; oil, gas, coal, and uranium.  They conclude that worldwide oil production actually peaked in 2012 and is on the the decline.  Other hydrocarbons and uranium, don't really look any better.

Review at least the executive summary of those two reports.  Then you decide if the exuberance you've heard in the popular press regarding U.S. energy production prospects has any rational basis.  I think it's a pretty classic example of wishful thinking on a national, perhaps a global, scale, but maybe I'm becoming curmudgeonly :)

Canadian economist Jeff Rubin's second book has been published in the U.S. with the title "The Big Flatline: Oil and the No-Growth Economy".  It came out in the spring of 2012 in Canada titled "The End of Growth".  It's available on Amazon both in print and on the Kindle.  If you don't have a Kindle, you can get the Kindle reader for PCs and Macs, or the Kindle App for your mobile device.  You can also find it on iBooks for an iPad or iPhone.  I purchased the iBooks version for $12.99.

This is the follow up to Rubin's "Why Your World is About to Get a Whole Lot Smaller: Oil and the End of Globalization".  Clearly he doesn't like short titles.  His blog can point you to that book--http://www.jeffrubinssmallerworld.com.  That book explains why we're running out of cheap "conventional" oil.  That's the kind of oil where you drill a simple hole and oil wants to come out.

The End of Growth/Big Flatline is overall the best general introduction to the issue of economic peak oil, combined with some rational projections about what might happen.  Plus some suggestions.  Jeff says that there's a lot of oil left in place.  My quick calculations confirm that--at most we've extracted 1/5 of what's in the crust, either as oil in sediments or as "tar sands" that can be cooked into oil.  Then I think the oil shale (not shale oil...) is quite a bit more.  That's organic material that hastened turned into oil yet.  Shell and other companies have been trying to cook oil shale into oil cheaply enough to be economically feasible for years.  Again, the concept of economically feasible oil leads us to a peak and and a decline

Jeff is also strongly of the view that what will really cause a decline in the greenhouse gas production that had driven climate change is economic contraction, not well-meaning but ineffective initiatives and agreements.  He spends several pages toward the end of the book illustrating the unreality of those good intentions.

Get a copy of Jeff Rubin's book.  It's pretty readable and informative.

When we visited Maui recently, I saw sugar cane for the first time-- 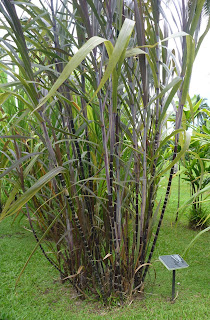 Sugar cane came to the Hawaiian Islands with the Polynesians in the range of 300-800 AD.  It was a part of a complex and sophisticated lifestyle.  As the Hawaiian version of the industrialization of agriculture, the plantation owners of the 19th century started large-scale cultivation and the importation of sugar to the United States.  Massive, industrial scale sugar production has enormous human and environmental health impacts.  William Banting wrote about this almost 150 years ago.  The issue gets much less attention than it should.  As we ride down the back side of the petroleum curve, the effects may actually worsen.

I started to comprehend the human effects about 11 years ago.  In 2001, a friend of mine started the Atkins Diet.  Atkins is a low-carbohydrate diet.  He lost weight, which puzzled me.  I had been running marathons and further since 1978.  Except for trying to eat a vaguely (as I imagined) balanced diet, I ate what I pleased with some allowances for avoiding sugar crashes in endurance bouts.  I sort of bought into the low fat, calorie management conventional diet concepts.  As it turned out, I wasn't thinking like an evolutionary biologist, despite my degrees in the field.

We visited the Hawaiian Islands recently, specifically Maui.  As usual, I got interested in the natural history of the place, including human impacts.  Our resort was in a part of the island that's mostly a mesquite bosque, with mongooses scurrying back and forth.  The mongooses were too fast for me to photograph, but the mesquites, called Kiawe Trees, held still-- 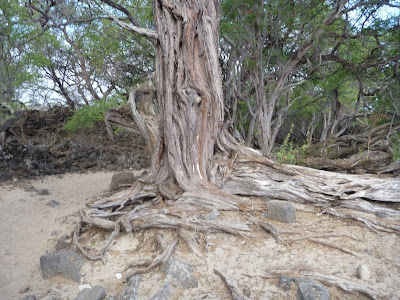 Mesquites, mongooses, and innumerable other plants and animals share something with petroleum; they're all imported.  Hawaii is famous as a living laboratory of biogeography.  The archipelago is so remote that living things only rarely reached the islands on their own.  Their descendants evolved into an array unique of species, like the Haleakala Silverswords and the Nēnēs.  When people, beginning with the Polynesian ancestors of the original Hawaiians, first arrived they brought new plants and animals, often wreaking havoc on the native ecology of the islands.  Europeans and Americans were fuzzy on what was useful.  The links above describe the spread of Kiawe trees, which were useful to people, and mongooses, which weren't.  The Polynesians who settled Hawaii, starting in 200-500 AD, had a pretty good idea what was useful.

I was wrong.  I've been telling people it isn't practical to build an electric airplane.  Well not only is it practical, you can actually buy one right now.  Popular Science has an article on the Volta Volare GT4.  The GT4 uses an electric motor to spin its propeller.

(URL from the Pop Sci article)

The GT4 has a range of 300 miles on batteries alone.  It also has a supercharged gasoline engine that runs a generator to produce electricity.  Combined range is a 1000 miles, which seems to be decent for this class of aircraft.  Volta Volare's website says you can reserve one for $9900.  You will have come up with an additional $485,100 to actually purchase one.  This is almost enough to make me get a pilot's license, assuming I won the lottery.  I'd best go check my tickets...